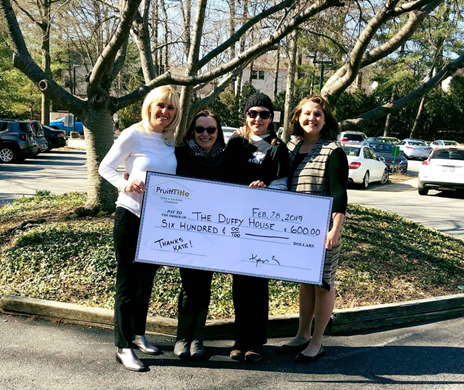 At the beginning of 2019, we implemented the monthly charity drawing program. We wanted a way to thank those that support Pruitt Title while also giving back to the community we serve. The idea was that the source of every referral we received would have their name put into a hat for a drawing at the end of the month. The winnings would be comprised of a set amount of money for each referral. Whomever won the drawing got to pick a charity where to donate the money. The program was a huge success as we were able to donate over $13,000 to local and national charities chosen by our referral partners. A few of the stories are below.

January’s pot was $600.00! The winner of the drawing was Kate Baggiano. Kate is a Realtor with Pearson Smith Realty and has been referring Pruitt since 2016! Kate chose The Duffy House as the recipient of her winnings. The Duffy House is based in Burke, VA and was founded by Christine Eads and Michelle Gates in 2011. They help women and children who are survivors of domestic abuse and sexual violence.

March’s pot was $1,060.00! The winners were Toby and Rachel Lim. Toby and Rachel are realtors and the owners of Treasury Homes, powered by COMPASS and have been referring Pruitt since 2017. They chose Northern Virginia Family Services as the recipient of their winnings. NVFS provides the essential building blocks for financial, emotional and physical well-being. Every year, they empower 35,000 individuals to achieve self-sufficiency.

May’s pot was $1,180.00! The winners were Meredith Hannan and Kristin Moody. Meredith and Kristin are realtors and owners of the Hannan-Moody Team of Century 21 Redwood Realty in Ashburn. They have been referring Pruitt since 2017. They chose The National Brain Tumor Society as the recipient of their winnings. This charity is especially close to Kristin and her family.

July’s pot was $1,570.00! The winner was Rachel Bleha with COMPASS.  Rachel is a realtor in Northern Virginia and has been referring Pruitt since 2017. She chose Blue Ridge Wildlife Center as the recipient of her winnings. Rachel is a lover and advocate of all animals so it didn’t surprise us when she chose an organization that is dedicated to the rehabilitation and conservation of Virginia’s native wildlife.

August’s pot was $1,390.00! The winner was Lynetta McMillon with Pearson Smith Realty. This is actually Lynetta’s second time winning! Lynetta has been referring Pruitt since 2017.  d has been referring Pruitt since 2017. The Fisher House as the recipient of her winnings. The Fisher House builds “comfort homes” where military and veterans families can stay free of charge, while a loved one is in the hospital.

Our last spotlight is the December winner. December’s pot was $600.00! The winner was Cathi Coridan with Keller Williams Realty. Cathi is a realtor and has been referring Pruitt since 2018. She chose The Father McKenna Center as the recipient of her winnings. The McKenna Center exists to meet the needs of the poor and homeless who reside in one of Washington DC’s poorest neighborhoods.

Please take a moment to review the websites of all the charities listed in this blog. There are so many needs in our community and beyond. If you feel led to donate to one of them, let us know and we will give you and your business a shout out on our social media channels. Thank you again to everyone that has made this program a huge success. We look forward to it continuing in 2020.